Last year I kept an updated top ten ranking that I threw out the window when it came time to actually make one list so this time I’m just going to break it down into my top ten books of each quarter and leave future me to deal with whatever it is I do at the end of the year. Anyway, let’s jump in! 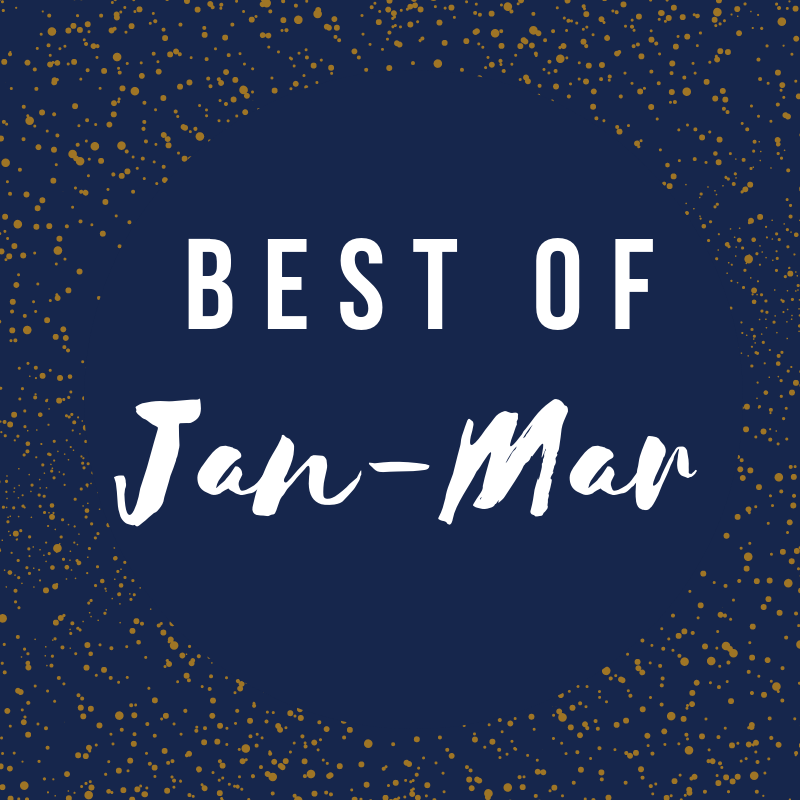 Hello, this is the greatest book in the world and if you’ve missed me spreading the gospel about it… I’m really not sure how. Whether in real life or online, I’ve pretty much talked about this book ad nauseam. It’s just so magnificent. If you like books about relationships and you’re in a place where you can deal with an ending that isn’t a clear HEA because what would have been an HEA here, honestly? then I highly suggest you look into picking this brilliant book up. It does deal a lot with drug use and alcohol use and addiction to both of those. I cannot wait until it’s a television show!!! Anyway, the audiobook is literal perfection so I highly recommend that specifically.

Apparently I really like sci-fi romance, which is a new discovery for me. Polaris Rising is really, really wonderful though because it’s kind of a forced proximity because the heroine and hero’s odds of survival are higher if they stick together. And the way they fall in love is just… I love it. Now, this is told from only the heroine’s perspective, but I had zero issues with that because I felt like the hero’s feelings were apparent enough that I didn’t feel like I was missing his perspective. (Actually, I didn’t notice that I didn’t have it until I read a review criticizing that aspect… Lol. Clearly unbothered over here. But that’s something you may want to know going in.) I absolutely cannot wait for book two to come out in October!!

3. Trail of Lightning by Rebecca Roanhorse

I picked up Trail of Lightning because I knew Dani had really liked it and I need to do a better job reading Indigenous voices. Well, y’all. I loved Trail of Lightning so much and I cannot wait for Storm of Locusts at the end of this month! The end of Trail of Lightning definitely has made the wait for Storm of Locusts a struggle. It’s an urban fantasy/post-apocalyptic novel inspired by Navajo mythology, where Maggie is a monster slayer orphan who has been left by her like, mentor person who is a god. Anyway, she winds up taking on this job that leads to the discovery of a super creepy monster and things take off from there. I absolutely adored it, in case that hasn’t been made clear.

4. An Unconditional Freedom by Alyssa Cole

Alyssa Cole is one of the most talented writers alive, I’m convinced. She is just… Her writing is so evocative and I always find myself feeling things so, so deeply alongside her characters. I just am in awe of her. Anyway, An Unconditional Freedom is a fantastic historical romance set during the Civil War between Daniel, a man who was born free and then was kidnapped into slavery and rescued by his childhood best friend Elle (and her husband), and Juanita, a biracial woman raised as a legitimate daughter to her plantation and slave-owning white father (who married her mother). I just… They’re both struggling with a lot and they’re both such real characters. Watching them slowly grow together and slowly move through some of their own emotional wounds just absolutely captivated me. I cannot recommend Alyssa Cole more. She’s amazing and if you haven’t given her a shot, you definitely need to do so!

5. The Names They Gave Us by Emery Lorde

My heart still hurts because of this book and I want to cry just thinking about it. Lucy finds out that her mom’s cancer returned at the very beginning of this book and instead of going with her parents to the Christian Church Camp they run during the summer, her mom makes her go be a counselor at Daybreak, a hippie summer camp. Emery Lorde has gorgeous prose and I love her characters and her writing so much. There is great friendship and romance in this one and I just… Yeah, if you can handle the subject matter, I would highly recommend.

Who would have thought that this book about a potential nun and a bad boy would be one of my favorites of the quarter? I mean, people who know Sierra Simone, probably, but it is definitely an interesting choice. Sierra Simone writing erotic theology is a whole concept I never considered a possibility until I actually read Priest and Sinner. I certainly wasn’t expecting this book to come for me the way it did, but… Y’all. This honestly made me feel closer to God than I have in ages?? Idk. But this book got me right in the feels and I just absolutely adored it. It’s definitely not for everyone, but if you think you can handle it, I absolutely recommend.

7. A Conspiracy of Whispersby Ada Harper

Another sci-fi romance that I absolutely adored! I am not sure I can really explain this world to you, but essentially our main character is something that means that she can get pregnant and she like releases a scent. This race that she belongs to is heavily regulated and essentially treated like Brood Mares. She’s an assassin though, flying under the radar, and she goes on this covert mission in another country and winds up taking the Prince hostage, kind of? But they have to work together and he like really likes her and just… I love this. I did a terrible job explaining, but like, you should definitely give it a shot.

I don’t know how to describe this book in a way that makes anyone want to pick it up (there’s cheating involved and also a cancer storyline), but like, holy cow, I love it so much. Kennedy could write anything, I think, and I would be right there hanging on to every word. Jared is not a good guy. He is so selfish and so Slytherin, but he loves Banner and I love Jared loving Banner, you know? And Banner is a badass. She’s so competent and good at her job and she does it without compromising on being a genuinely good person. I love it and I love her. If you’re willing to give her a shot, I would absolutely recommend you do so! This book is much less traumatic than Long Shot and I love it a whole lot.

9. Luck of the Draw by Kate Clayborn

This book was actually given a shout out on Fated Mates today for their Interstital episode on fake engagements. Essentially, Zoe was a lawyer involved in settling wrongful death cases and when she won the lottery with her two friends, she went ahead and quit her job because it made her miserable. Unfortunately, just quitting didn’t make her feel better about herself so now she’s trying to make amends. When she shows up at the home of one of the family of one of the wrongfully dead people, she winds up agreeing to pretend to be Aiden’s fiancé so he can convince these people to sell him their camp. This book is so angsty and it’s so great and I loved it so much. I highly recommend.

Where to even begin? Hannah is a prickly heroine who suffers from depression and she has a difficult time letting people in. Nate is in need of a nanny because he’s really struggling to take care of his sick mom and his two kids, but he didn’t really intend for that nanny to be the woman he had a crush on in high school. (I’m not using British words, sorry.) Anyway, the two of them try to be PROFESSIONAL but they’re both really attracted to one another and like, it won’t hurt anything if they give in this one time, right? And then again… and again… You get the point. I really love them together and I’m super looking forward to reading the conclusion to the Ravenswood series. Also, check out this new cover!!

One response to “Favorite Books of Jan-March”