How is it already January 1, 2019? 2018 was a decade long, but somehow the month of December flew by? Are all years like this? I don’t think so, but time is an illusion. Okay, confession: I’m sick and when I’m sick, I get extra melodramatic, which is already like a key component of my personality. Anyway, let’s talk about books, shall we? I read some really good ones and also one that has me ragey and one that has me confused about how I actually feel. 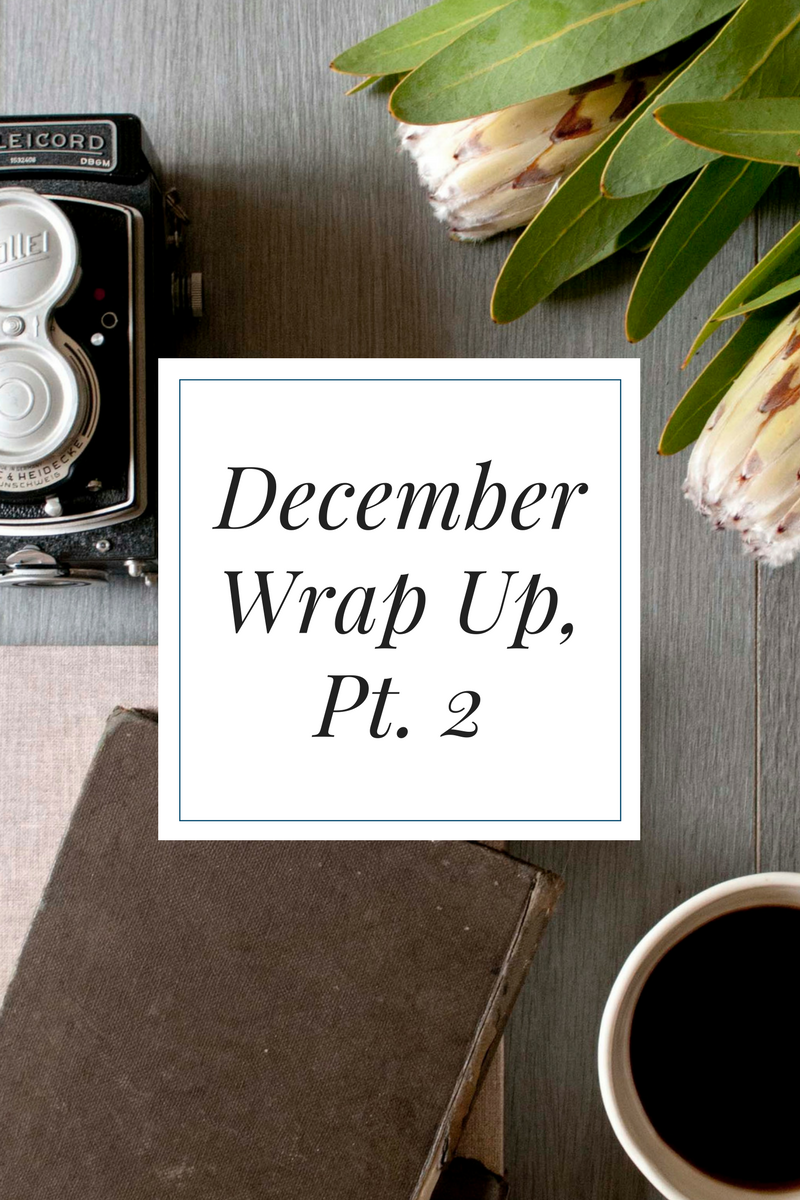 1. Wicked Deeds on a Winter’s Night by Kresley Cole

So far, this book is my favorite Immortals After Dark book. The amount that I loved Mariketa is really just… I can’t put it into words. But if you want to hear three people try to, check out the Fated Mates podcast episode on this one, because it was fantastic. I feel like the things that made me love this one are largely spoilery so I’ll just say that this romance was fought for and something about it had Bowen on the right side of alpha male for me to love. Probably, maybe, because Mariketa is a badass witch and I love her. Okay, moving on…

Y’all, this novella was everything. I don’t remember now what specifically made me pick it up and read it immediately (good job though, past me, good job), but I just want you to know that this book is a brilliant representation of trauma and also Samir is one of my favorite heroes of the whole year. And Laura! She was such a Mean Girl in A Girl Like Her and Talia just gives her a whole backstory and a personality and I didn’t even care that she was pregnant!! I loved everything about this novella and for real, Samir is such a perfect hero. I love him, y’all, I just love him.

I really loved reading this historical set in the Space Age instead of the usual suspects! I picked it up because I’ve seen a few people talking about how much they like the most recent one in this series, but I think it got off to a great start too. This book follows Anne-Marie, the divorced mother of two who moves in next door to Kit, an astronaut playboy. Anne-Marie is very wary of the way her body instinctively reacts to Kit and is determined she is not getting involved with THAT ever again. In fact, Anne-Marie is about where I’m at with men when this book starts:

She’d been hoping for a new start in Lake Glade, but she should have known that men were the same everywhere.

I will say, I could see a critique that their romance is not the most well fleshed out. There did seem to be something missing just before the end that had me kind of questioning things a bit. But for the most part, I felt like this was a fantastic book and I bought two more in the series. (OH! And, it’s currently free on Amazon!)

I already loved Michelle Obama before I dove into this audiobook and I was halfway through it at the end of November. I’m genuinely the worst about reading nonfiction though so I hadn’t picked it back up since. I really, really loved this memoir. I think Michelle is so smart and funny and she has this sense of humor that just really gets me. There were things I wanted to know more about, but for the most part, I felt like she told us the exact right amount about things that have happened to her. Here’s one of a billion quotes that I loved from this book:

If you don’t get out there and define yourself, you’ll be quickly and inaccurately defined by others.

5. A Kiss for Midwinter by Courtney Milan

I’m like 99% sure I’d read this book before, but when it popped up on my Goodreads TBR I started questioning myself, so I decided to listen to the audiobook (it’s in the Audible romance package) real quick to clear it up. The answer to my question was that yes, I have read this book before and that Courtney Milan is amazing and I really love this novella. Essentially, our heroine got pregnant by a shady asshole who took advantage of her when she was too young and then this asshole doctor gave her a prescription of actual POISON so she would die (I’m pretty sure that was his goal). Anyway, our hero was with the asshole doctor, but he didn’t feel like he knew enough and that it wasn’t his place to say anything. Years later our heroine hates him because she thinks he’s judging her, but actually, he’s in love with her. So he makes this deal with her that she make three house calls with him and if she can’t find the good in one of them, he gets a kiss. If she finds the good in all of them, he’ll leave her alone forever. Obviously they fall in love, but watching them get to that is amazing and wonderful.

6. Dance All Night by Alexis Daria

Speaking of novellas I love, y’all. Dance All Night is incredible. I loved everything about it and I’m so, so glad Alexis released it. Jess and Nik share an explosive kiss on NYE, but that’s all because Nik is headed back to NYC and Jess is happily situated in Los Angeles. When Nik returns to LA he’s pretty sure he’s here for good, but more specifically, he’s here for Jess. He convinces her to go on three dates with him and that if she kisses him on NYE, he’ll know she wants him and he should stay. These dates are amazing and the chemistry between Jess and Nik is *waves hand as a fan*. I loved this one so freaking much and I really hope you’ll read it. Also, this line!!!

“If I have to trick you into kissing me, I’m doing something wrong.”

7. Reindeer Games by So Many People

I’m just going to refer you to my Goodreads review because otherwise reviewing this anthology would take forever and I’ve already done it once! What I will say here is this: this anthology features stories that feature the forced proximity trope, generally because of too much snow. I enjoyed the majority of the stories in this anthology and I hope that if you read it, you will too.

8. The Wrong Game by Kandi Steiner

This was my first Kindle Unlimited purchase with the membership coming for free for the first month as part of my new Kindle perks. I really enjoyed this book that is essentially a practice dating book, which is one of my favorite concepts. On the same day Gemma decides to confront her husband about the fact that he’s cheating on her, he tells her he has cancer and it’s terminal. Gemma is still grieving her husband, although her feelings are complicated because of her fury about the cheating. She’s also religiously devoted to lists, which was something I could appreciate. She and her best friend hatch a plan for Gemma to take a different guy to each home game for the Chicago Bears in front of a super cute bartender who is like, “You want practice first? Take me.” BLESS. Zach is a great hero and Gemma is wonderful. I really enjoyed it. Here’s my favorite exchange from the book:

“I love when you do that,” he whispered.

9. Once Upon a Bride by Jenny Holiday

This was really a good month for novellas, apparently, because I five starred this read as well. I am now so excited to jump into Jenny Holiday’s Bridesmaids Behaving Badly series because wow, what an intro to these characters! I love female friendship so much and this book is as much about the friendship between these four women as it is about the relationship between Elise and Jay. I cannot stop thinking about their meet cute though and Elise proving her skills by pointing out that Jay’s tie is millennial pink. Also!! This book features a couple of scenes where Elise is in debilitating pain because of her period and like, wow, unheard of, also AMAZING.

Okay, so I really liked the first book in this series by Samanthe Beck, right up until that plot twist and I was introduced to the couple in this book so I really should have known that this one was not going to work for me, but… So essentially, Hunter Knox is a paramedic who at the end of Emergency Engagement delivers a baby on the side of the road. The mother of that baby is Madison Foley. Hunter has this hero complex which leads him to track down Madison at the hospital, decide she can’t live in a shitty hotel and moves her into his home. The ethics of this entire novel were so weird that I spent half my time being like WHAT ARE YOU DOING? And I could have let them go because suspending belief and all that, except the characters kept bringing it up. So if you’re going to bring up the thing that you’re going to require me to suspend my belief about, it’s just not going to work. Anyway, I could not buy into their HEA at all because WHAT ARE YOU DOING? Ethically, this book was a mess. It’s not that I don’t think there are people out there who have fallen for their paramedic and lived happily ever after, but I have a feeling their paramedic didn’t sweep in with an overinflated sense of their way being the only right way and kind of coerce you into going along with it. Woah. I just had so many negative feelings about this book, y’all. But I still want to read book three in this series, so that says something about my enjoyment of Beck’s writing, I guess.

Oh my gosh, y’all, I loved this one so much. SO MUCH. Like don’t be surprised if you see this book again so much. Kit Averin is a scientist (!!) and when Ben Tucker waltzes into her lab looking for her and then refuses to believe she’s who he’s looking for, I died. Everything about the set up of this book is brilliant. Ben is back in his hometown taking care of his dad who had an accident and running the salvage yard his dad owns, while trying to recruit Kit for this big science company she’s not interested in. What she is interested in is the Ben she meets who is super knowledgable about all the fixtures she needs to fix up her old house. Also worth mentioning is that Kit has never really had a home of her own and it is so important to her to connect to this community. I just… I really loved everything about this book and immediately launched into book two, Luck of the Draw. Also, have this fun quote:

“Coffee,” she whispers against my lips. “I don’t care who you have to murder to get it.”

*Unless you want to read about an orphaned teenager being rescued by a rich guy from a strip club, being bullied by rich guy’s sons, falling for one of them for NO REASON, and then having a cliffhanger NOT an HEA ending**

So there you have it! I’ve finally recapped every book I read in 2018. Wow. Soon you’ll also have my 2018 stats to look at if you’re curious and some more recaps and fun things. What did you read in December? Did anything make you as mad as Paper Princess did me?