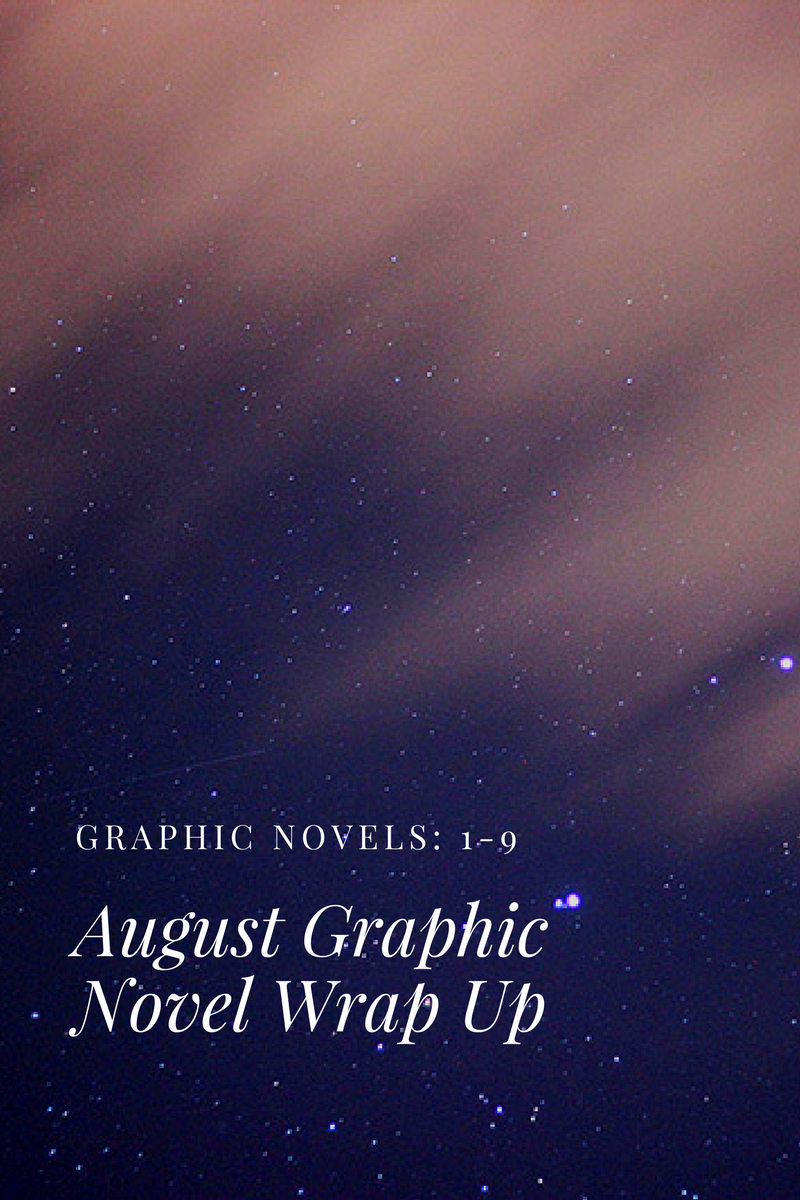 Aside from reading The Watchmen in high school at the behest of my then boyfriend and flipping through Archie comics while waiting in line at grocery stores, I’ve never read a graphic novel. That all changed this month when I picked up Nimona, thanks to Chelsea. I had been watching several Booktubers discuss their favorite graphic novels and comic book bind-ups too so after I read and thoroughly enjoyed Nimona, I set out to try and figure out how to get my hands on more.

This led me to discovering Hoopla, which is the most amazing app. Hoopla connects through your library card if your library hosts a subscription and based on how many things your library lets you check out, you can get up to that many things from Hoopla. Fortunately for me Hoopla has a pretty excellent selection of Graphic Novels (but sadly no Marvel comics) and my library provides me with ten checkouts a month. So thanks to Hoopla, welcome to the graphic novel wrap-up that will likely continue to be a feature on this blog.

Thank you also to Durham County Library System! I am happy to provide you with my tax dollars because you have the best library system and I love you.

Now without further ado… To the books!

I gave Nimona four stars because I enjoyed it, but I guess I just felt like something was missing. I still haven’t put my finger on what exactly I felt was missing, but I know that if there was ever a sequel, I would be thrilled.

Nimona tells the story of Nimona who shows up and informs Lord Ballister Blackheart that she’s going to be his new sidekick and he should be okay with that because she’s a shapeshifter. Even though Lord Ballister is a villain, Nimona is the one who really wants them to wreak havoc and mayhem. Lord Ballister is the one on the right (when you’re looking at the cover) and he and Sir Ambrosius Goldenloin used to be the best of friends (and lovers) when they were training to be heroes together. But during a jousting session, Goldenloin blew up Ballister’s arm and Goldenloin became the Institute’s hero and Ballister became the villain.

2. LumberJanes Vol. 1, Beware the Kitten Holy by Noelle Stevenson, Grace Ellis, Faith Hicks, Brooke A. Allen (Illustrator), and a lot of other people…

I loved this graphic novel so much. It’s the first one I rated 5 out of 5 and it’s a huge win for me. The comic is basically about these five friends, April, Jo, Mal, Molly, and Riley, who are campers at Miss Qiunzilla Thiskwin Penniquiqul Thistle Crumpet’s camp. They get into a lot of misadventures because nothing is as it seems.

Basically, this is a comic devoted to female friendship and mystery solving, which means going on quests and having really weird supernatural-ly things happen to the girls. I adored it and I loved the art. I was so excited to continue on to Volume Two, which I did right away. Here’s a little snippet from the volume so you can see how gorgeous the art is:

Despite having recently read this, I’m still not really sure what happened, honestly. I just really didn’t enjoy this bind up nearly as much as the others that I read this month so while I’m curious about the plot, which appears to involve either aliens or time travel (or maybe both?) I’m not curious enough to use one of my ten check outs on Paper Girls until I’ve finished some of the other collections I’m reading at the moment (like LumberJanes, Saga, and March). What I didn’t like about this book was some of the language that was used, including a homophobic slur, and a few other lines that just really bothered me. I guess I’m supposed to be understanding about that given that it was 1988, but I’m just really not. The slurs brought me rather abruptly out of the story and I found it hard to continue reading after that.

This is the synopsis provided on Goodreads: In the early hours after Halloween of 1988, four 12-year-old newspaper delivery girls uncover the most important story of all time. Suburban drama and otherworldly mysteries collide in this smash-hit series about nostalgia, first jobs, and the last days of childhood.

I am a little surprised that Vaughan wrote both Saga and Paper Girls but at the same time, I definitely get it. Saga is much more engaging than Paper Girls right off the bat, but there are still elements that made me cringe, like the use of the word retarded. I’ve been hearing that word too often lately anyway because North Carolina’s Supreme Court hasn’t written an opinion officially updating our language to intellectually disabled, which is annoying. However, that does mean I’m very sensitive to it, so I was really annoyed to see it in writing in this comic. There is also a lot of really unnecessary nudity of these alien races, but that is what it is, I suppose.

As for what Saga is about, basically, these two people (Marko and Alana) fall in love and have a baby (Hazel), except they’re on opposite sides of a war that’s been going on for a really long time. They’re from two different alien races and they’re on the run, with a newborn. The story is quite compelling and keeps you reading. Other characters include The Will, who is a contract assassin basically, who has been hired to go after Marko and Alana. I don’t know if you’re supposed to like him or not, but he keeps growing on me.

I really don’t know that words can do justice to this story. It’s very complex and interesting, but very hard to explain.

I discussed this book in my 7 in 7 Readathon Wrap Up so I won’t revisit it much here except to say that this book, which is about Senator John Lewis’s life, should be mandatory reading and I look forward to Books Two and Three next month. In case you aren’t aware, Senator Lewis (GA) was a very important civil rights figure and Book One covers his life through sit-ins in Nashville when he was in college. It’s told as a reflection on his life from the day of President Obama’s first inauguration.

I discussed Kindred in my 7 in 7 Readathon Wrap Up as well, so I’ll be similarly short here. Kindred is a science fiction novel that was adapted by Damian Duffy and released this year, nearly eleven years after Octavia Butler’s passing. The premise of this book is that Dana gets sent back in time on her 26th Birthday to save the life of her white, slave-owning great-great-great grandfather. The art in this graphic novel is great and it feels like a complete story, which I think can be slightly challenging when you turn a full book into a graphic novel.

7. LumberJanes Vol. 2: Friendship to the Max (see above for authors/illustrators)

Again, I discussed this one in my 7 in 7 Readathon Wrap Up, but just know that I absolutely adored this one and the art is equally gorgeous. I cannot wait to get my hands on Volume 3 next month. The story really grows in Volume Two and I just adored it so much. Also, just FRIENDSHIP. Plus, look at Jen on the cover! I’m so proud of her character development and also, JEN. (Are my two favorite characters April because she’s a redhead and Jen because she shares my name (kinda)? Yes. Yes, they are.)

And now I get the hype. Volume Two builds on the story so much and then ends in such a way that has you desperate to get your hands on Volume 3! The characterization really builds in Volume 2 and the story and the world starts to really expand. Also, I felt like there was slightly less gratuitous and unnecessary nudity. Plus, you can’t go wrong with more scenes with The Will and Lying Cat. And I really appreciated the introduction of a few characters, which I can’t really talk about because spoilers!

I loved Anne of Green Gables growing up and since the new Netflix series came out I’ve been desperate to re-read it. Unfortunately, the book is buried in a box somewhere at Mom and Dad’s, so when I saw this ARC on Netgalley, I obviously seized the opportunity to get my hands on it. While it didn’t quite live up to the experience of reading the book, it was incredibly well-illustrated and I really enjoyed it.

But how can you not love a book that has an illustration of “I’m so glad I live in a world where there are Octobers!” You can’t. That’s the answer.

I had a few others that I planned on reading, but I burned myself out a bit. So perhaps later I’ll return to Monstress and The Wicked + The Divine, but they just weren’t clicking with me right now. Have you ever read graphic novels? If so, what do you think? What are your favorites? Let me know in the comments below!