October Wrap Up: Part One

This has actually been such a good reading month for me. I have so many books to tell you all about that I’ve read in the first 14 days of October. I’m really excited to continue my fantastic reading month with the Readathons coming up! 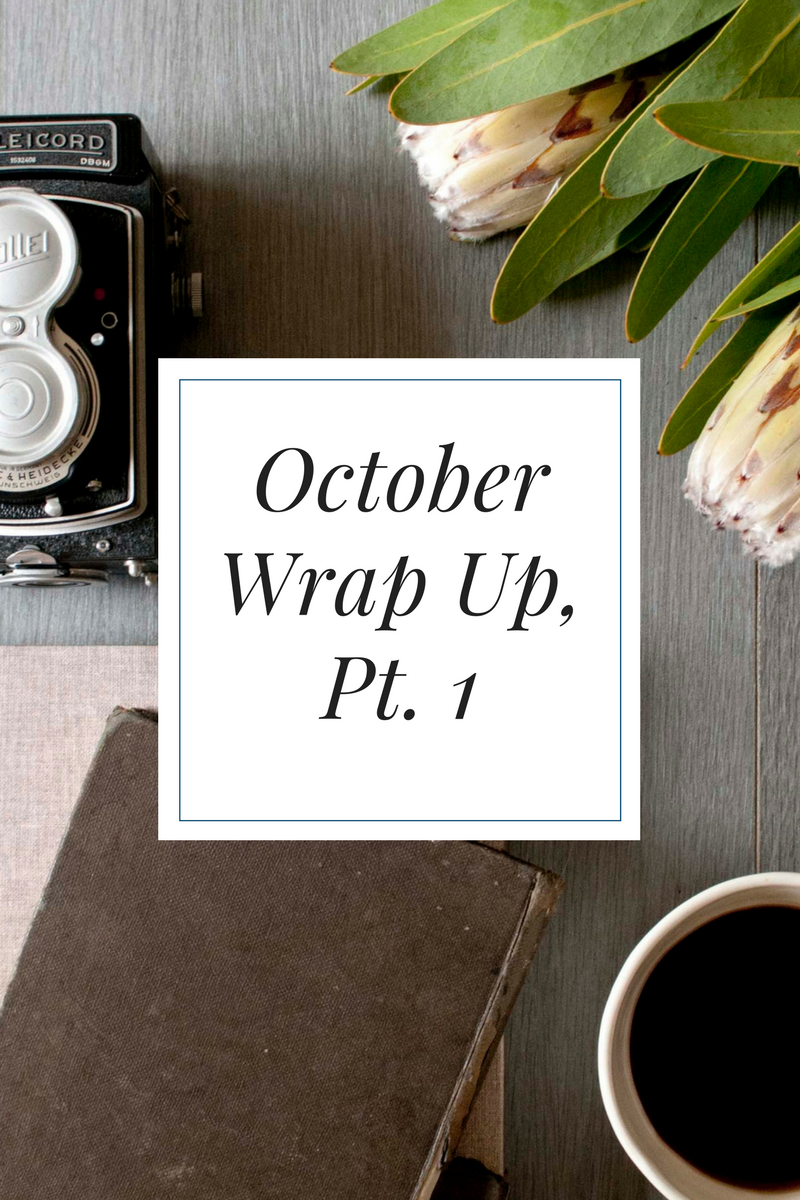 I wasn’t excited about the couple in this book. Sami and Tace were interesting enough side characters, but not ones I was particularly excited about the idea of reading a book entirely about the two of them, but, uh, so sorry Sami and Tace, because wow. They have some serious chemistry together. And the plot! It moves! (And perhaps more importantly, that cliffhanger that had me literally racing out of the house to find the next book, which I had to buy on my iPad because Barnes and Noble is rude.) Oh! And Sami is Korean American, trained in martial arts and video games, and she’s also a computer hacker, in case any of those things make you want to pick it up more.

Moe and Greyson are… everything. I just love them. I love Moe, I love the plot of this book, I love the tropes, just… all of it. Also, I love how different Jax and Grey are, even though they’re both leaders and former military. I think it would be too easy to make them virtually the same, but Zanetti definitely did not do that. So despite both being alpha males, they have very different ways of doing things. I wouldn’t say that I like one more than the other either… They’re both just really great. I will say that I like that we continue seeing Jax and Lynne together in the other books, but I would like to get more scenes with the other couples too. I feel like we see Vinnie and Raze in passing, but not with the same quality. As for diverse elements here, Moe is Native American x Irish. Also, the next book is going to be AMAZING so I need it to be here right now. The plot is moving, y’all, and I’m loving it.

Oh. My. Gosh. I loved this one. Are there people who don’t think this is the best of the series? Because I disagree. (At least so far.) Also, this cover is so gorgeous!

This book was really about character development and plot and for me, it hit the perfect balance. However, with that ending… GIVE ME THE RAVEN KING NOW. If you haven’t read The Raven Boys, I highly encourage you to give it a shot. It’s incredible.

4. Touch of Red by Laura Griffin

This book was incredible. I adore the Tracers series (even though I haven’t read as many as I would like yet) and they are absolutely perfect for October and really any time you want to scare yourself a little. I found this one particularly compelling because of how much I love Sean as a character. I think he’s a really great hero and I loved this passage that talks about his tenderness being evidence of his strength. Too often heroes in romance who are cops can be cocky and overbearing, but I really feel like Sean balanced his concern over Brooke and her actions with reason and logic. Although, for once, I was inclined to agree with Sean. Brooke had a tendency to be reckless with her safety and since she was working with the police, I just kept thinking through how the motion to suppress hearing was going to go and feeling really bad for Rachel (the DA) who would have to argue it. Of course, my experience reading this as a lawyer (really, it’s official now! I’m sworn in and everything!) and a layperson reading this is going to be totally different. Overall though, I highly recommend this book! It was so good and had me on the edge of my seat!

This book comes out on October 31st, so look out for a full review later this month!

5. A Gathering of Shadows by V.E. Schwab

Book Two of the Shades of Magic trilogy starts out incredibly, incredibly slowly. I was so aggravated because I thought we’d gotten through the slowness in the first book. And then around page 252 or so, it started to take off. AND THEN it ends on a cliffhanger and y’all, I am UPSET. Fortunately, I only have to wait for my hold to come through at the library in order to read the next one and I don’t have to wait months for it’s release so thank goodness for that. I really enjoyed the dynamic between Kell and Rhy and how they’re dealing with the consequences of A Darker Shade of Magic. I also really enjoyed the new character Alucard and his relationships with each of the characters he interacts with.

I’m treating these as one book even though they aren’t because Royally Raised was a 32 page short story. It’s a short story about Jane, the oldest daughter of Henry and Sarah, and it made me really want to hear more about her life. I hope that we get to at some point!

To talk a little more about Ellie and Logan, do not worry about the age difference. Ellie begins Royally Endowed still in high school and while she flirts with Logan, he is really respectful of her and acknowledges her age. The book kind of walks through a few different big events in the character’s lives and I just really respected the way it was handled. Logan’s also very conflicted about his feelings toward Ellie because of how it jeopardizes his job, which is such a real and legitimate reason, so I appreciated that.

Woah, buddy. Apparently this is the month for me to read romantic suspense and get super freaked out about everything. This book feels a little like Law and Order: SVU, so I was aware pretty early I was going to be freaked out. The murder(s) in this book are awful, just utterly cruel and Eve is the lead investigator. When the evidence points to Roarke as a potential suspect, Eve tries to fight her attraction to him. Fortunately for all of us, she fails. Roarke is exactly the kind of alpha male I need in my life (my reading life) because he never tries to interfere with how Eve does her job. So he worries about her and asks her to be careful, but he never makes it seem like she’s too weak to do her job. And he’s happy to help when she wants his help. There was one scene early in their relationship that I found mildly troubling, but not terribly. I rated it a four stars because I enjoyed it but didn’t LOVE it. I’m going to read more in the series though so it did it’s job!

8. They Both Die at the End by Adam Silvera

Adam Silvera must be magical. I just… How can he write a book that feels like it should be full of tropes or clichés that feels so unique and original? I mean, he’s obviously talented, but I was trying to explain this book to my sister and she was just so unimpressed. Hm, maybe the failure is on me? Just in case, here’s the blurb before I gush about my feelings:

On September 5, a little after midnight, Death-Cast calls Mateo Torrez and Rufus Emeterio to give them some bad news: They’re going to die today. Mateo and Rufus are total strangers, but, for different reasons, they’re both looking to make a new friend on their End Day. The good news: There’s an app for that. It’s called the Last Friend, and through it, Rufus and Mateo are about to meet up for one last great adventure and to live a lifetime in a single day.

Basically, Rufus and Mateo are both such distinct characters, with their own lives and stories and motivations that Rufus healing and Mateo finally living just… It’s magical. The bond that the two form? It’s just magical. I hope you read this book and I hope you love it as much as I did. 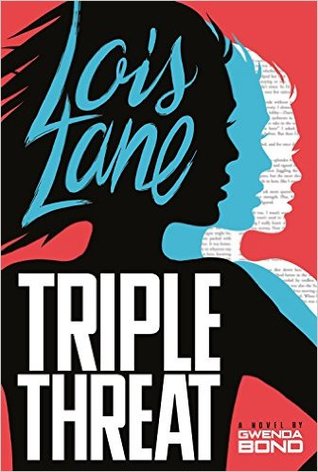 Last but not least, I finished Triple Threat and adored it so much! Triple Threat is the third book in a series about Lois Lane as a teenager, wherein she’s best friends and maybe something more with a boy who lives in Smallville, Kansas. Lois lives in Metropolis so the two communicate via a virtual reality game and smallvilleguy helps Lois with her articles from afar. Did I mention that Lois and her group of friends are teen reporters for the Daily Planet? They are. I love it. I love them. This book is probably my favorite of the series so far and even though Gwenda Bond says it’s probably the last book in the series, I am desperately hoping her publisher changes their mind.

It is also worth noting that these books have the softest pages and I love the way they feel so much. I would e concerned about how weird that sounds, but I trust that y’all understand me when I say things like that. I hope you try out this series and love it as much as I did!

Any books that I finish during the Readathons will be re-capped in my Readathon Wrap Up. Any additional books that I read in October will be in my October Wrap Up Part Two. What’s been your favorite read so far in October? What are you currently reading?