7 in 7 Readathon Wrap Up 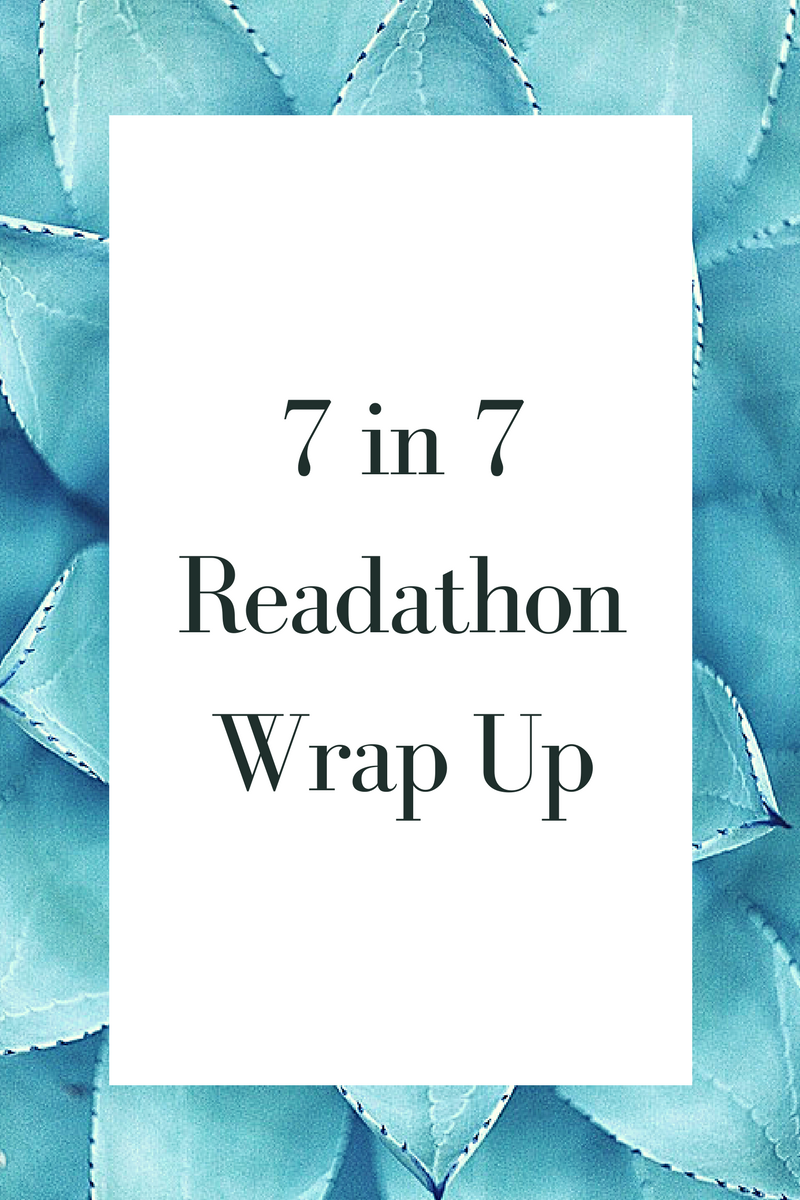 I succeeded, y’all! Not so much at reading everything on my TBR because the longer I reflected on what happened in Charlottesville, the more convinced I became that I needed to be reading people of color for this readathon, especially women of color. I mostly succeeded, with the exception of sneaking in a graphic novel not written or illustrated by a person of color because I couldn’t finish Homegoing on Sunday because your girl is tired. So I switched up my TBR a little bit, but I really enjoyed my reading week!

This was not supposed to be my first read of the readathon, but I gravitate to fun and happy reads when the world feels like an ugly place. Also, my apologies for using the same photos over again because I’m too lazy/not creative enough to take another one. Seriously, how do people Bookstagram? I’m so glad they do because pretty, but I am not creative.

I already told you all what this book is about, but in case you missed it, basically Dimple and Rishi’s parents decided the two should have an arranged marriage, but only Rishi knows. Dimple is desperate to go to this Web Development camp in San Diego and her parents agree because Rishi can go. The two meet, Rishi is thrilled, Dimple is irate, and the story goes from there.

I really enjoyed this book, but it had my least favorite conflict device in books. Like, there is nothing that drives me more crazy than characters who are like, “Oh no, being with you is making me picture a different life than the one I had originally pictured!” Like, okay? I just don’t understand. You’re allowed to change the things you want and, more importantly, you’re allowed to have love and a career. It’s allowed. It might even be preferred. I still enjoyed this book and gave it a 4 out of 5 stars, but I was hoping I would LOVE this book.

I haven’t reviewed Volume 1 yet, but there will be a review in my graphic novels wrap up at the end of the month! I used this story to get through The Vegetarian, next up in this wrap up, because woah did I dislike that book.

LumberJanes is an incredible graphic novel/comic book series and I adore it. It’s really about female friendship, which if you know me at all, you probably know female friendship is my favorite thing. In addition, I love the art work. I love the colors. It’s just so amazing. I highly recommend.

3. The Vegetarian by Han Kang, translated by Deborah Smith

So, maybe I’m just not smart enough for this book or maybe I’m too sensitive or not intersectional enough in my feminism… I don’t know. But this book won the International Man Booker Award and I’m baffled. Why? There is so much sexual assault in this book and I still don’t understand if the main character was actually suffering from mental illness or an eating disorder or what. And I really don’t understand why it was told in three parts from three perspectives, none of which were the perspective of Yeong-Hai, who is theoretically the main character. This book was not for me. If it’s for you, please let me know all of the things I should have gotten from this book in the comments because… I missed every good point, I think.

I don’t recall learning much about the Civil Rights Movement in school or in the massive amounts of historical fiction I read as a child, which is obviously a problem. I’ve had this graphic novel on my TBR for a long time and I’m so glad I finally got around to Book One. I can’t wait to finish the trilogy.

In case you aren’t aware, March follows Senator John Lewis reflecting back on his life on President Obama’s first inauguration day. He was born in the South and grew up taking care of the chickens on his family’s farm. He valued education so much, but he went to segregated schools that were supposed to be “separate but equal.” He talks about when Brown v. Board of Education came down and how things didn’t change right away. He went to school in Nashville and talks about the sit-ins and the importance of non-violent protests. My favorite part though was learning about his disagreement with Thurgood Marshall. Marshall was the first black Supreme Court Justice and he’s one of my favorite justices because of all of his amazing Fourth Amendment dissents. It was just really great to see Senator John Lewis disagreeing with Thurgood Marshall as to how the black community should be responding to the small (microscopic) steps toward equality Nashville and other cities were offering.

This book is incredible. The art is black and white, which isn’t necessarily my favorite, but also feels like it fits the mood, I think?

This was my first graphic novel adaptation of a novel and I really enjoyed the concept. Fortunately, I also enjoyed the story. Kindred is a book written in 1979 and it’s a science fiction novel written by Octavia Butler, who was a renowned writer and black woman and is really considered one of the classic voices of sci-fi. I’ve had Kindred the novel on my Kindle for probably about a year now, but kept putting it off in favor of light hearted reads, which this book definitely is not. Kindred is the story of a black woman who on her 26th birthday randomly goes back in time and saves a drowning boy named Rufus. These weird events keep happening to her and she eventually realizes she’s traveling in both time and distance, from the 1976 to pre-Civil War Maryland. She also comes to realize that Rufus is her white, slave-owning great-great-great grandfather and she has to keep him alive long enough to preserve her existence.

The graphic novel is fast-paced, but I didn’t feel like we were missing plot points. Having not read the book prior to reading the graphic novel, I’m not sure if things were left out, but I definitely felt like I got the entire story. It’s both an easy read because of the format and a hard read because of the content. I found many of the themes the book explored really fascinating and I’m looking forward to finally reading the novel now that I’m better prepared for the story itself.

6. Not Otherwise Specified by Hannah Moskowitz

I loved this book so much. You may remember from my Try a Chapter: Library Edition that I thought this book had a startling beginning because it just lays out all of Etta’s problems at once. She’s a black, bisexual teenage girl recovering from an eating disorder who got friend dumped because her friends are biphobic horrible people. This book is about those things, but it’s about so much more. This book is about friends and finding who you are and learning to recognize that it’s not okay for people, even people you love, to treat you like less than a person.

As for the recovering from an eating disorder aspect of this book, while I have no personal experience, Emma from emmmabooks wrote this really thoughtful review on Goodreads about her experience with an eating disorder and her recovery and how she related very strongly to Etta’s experience. As for the bisexual representation, this book is #ownvoices as to that aspect of the story and the biphobia Etta experiences is something I’ve seen my friends who identify as bisexual go through as well. This is not, however, actually written by a black woman, but I haven’t seen any reviews about the representation from that angle.

I experienced so many emotions reading this book, I cannot even explain to you, but I can show you my Goodreads updates.

I really just cannot recommend this book highly enough, y’all. Please read it and come squeal about it with me.

7. Hate to Want You by Alisha Rai

Y’all. This book is AMAZING. I was feeling so many things reading this book last night. I’m going to screenshot my Goodreads updates for this one too so you can see all my feels as they were happening. Well, not all of them, or I would have been updating Goodreads even more often than I was, which was a lot.

This book is a second chance romance and enemies to lovers sort of thing. Kind of a Romeo and Juliet vibe except with significantly less stupidity and it’s actually a good book. Neither of these characters ever felt like they were in serious need of a redemption arc. Like, yes, Nicholas broke Livvy’s heart after the family drama went down, but it was beyond obvious that he must have had a good reason because homeboy is in love with her like woah. And yet, everything standing in their way felt so real. There’s so much pain there. So much pain and devastation, but you just know that love has to win because these two characters love each other so much that they are a part of one another.

And my favorite part (probably) was Livvy talking about how she’d gone to therapy and actually utilizing her therapy tools throughout the novel. YES. Let’s normalize taking care of your mental health. Let’s normalize needing and using coping strategies in our lives. I’m beyond here for it. Alisha Rai is my hero for weaving this tale the way she did.

Smart Bitches Trashy Books is hosting a live discussion on August 30th about this book and Alisha Rai will be answering questions. You should absolutely read this book and participate! I’ll probably (but no promises) post a full length review of this romance novel on the 30th because I just have so many thoughts and feelings!

And those are the seven books/graphic novels that I read for the Seven in Seven Readathon! I am thrilled to say that two of these books are going on my Favorites of 2017 list and that I really enjoyed every book, but one from this week. I had a great time participating in this readathon and I hope you enjoyed my wrap up! If you’ve read any of these books or have thoughts/questions, please let me know in the comments!